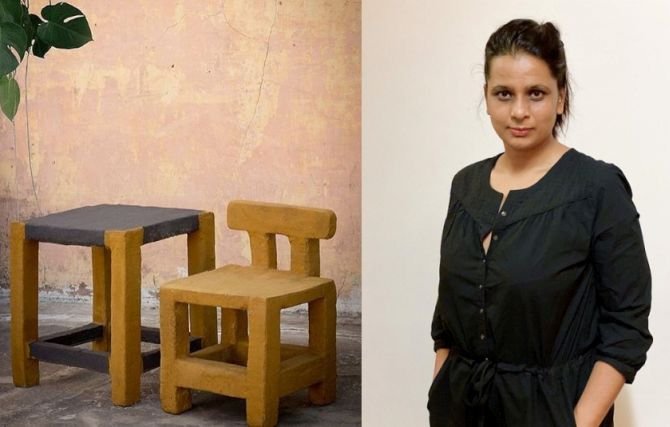 According to The Myth of the Paperless Office, a company has an average 40% increase in paper consumption every year. The demand for white paper is puts a huge strain on world’s forests. It is forcing the environmental movement to consider the alternatives.

Turning the wood pulp into a paper is both a boon and a bane. It just takes a couple of minutes to scrape and use the paper, but it takes a lifetime for a tree to grow. Recycling paper is one solution, but these methods are not enough.

Spriha Chokhani, a Jaipur-based product designer and entrepreneur, is the founder of Pulp Factory, a design studio founded in 2017 that makes products using waste paper.

Spriha had the idea of turning waste paper into furniture about ten years back when she was a student at a design school. As a part of the project assigned to them, they had to either work under someone or carry out independent work. She spoke to Better India as follows.

“We were supposed to work with materials and I started noticing that a lot of people were working bamboo or cane. While this helped in developing more products, materials like papier-mache were heavily ignored. Other than a few souvenirs from Bihar and Kashmir, this material was hardly ever explored. This is what got me really curious,” says the 32-year-old.

She came up with a range of papier-mache furniture, which is 100 per cent compostable. The six different styles of furniture that they have can withstand the weight upto 80-100 kg. Moreover, these are water-resistant and made using natural materials. Today she sells the same, along with pouches, totes, and box bags made using paper textiles, under her label – Pulp Factory.

A long period of experimentation

Spriha was brought up in Assam and later moved to Bengaluru to pursue a degree in Product Design from the Srishti Institute of Art, Design, and Technology.

It took her a three month long diploma project to use papier-mache as her material of choice.
“Initially, when I was making the furniture, I was using strong adhesives made with chemicals. That had a negative impact on my health. I began questioning myself about what is the point of making a product if it isn’t maker-friendly. That is when I decided to look out for natural materials that ensure the well-being of whoever was making the furniture,” she says.

Spriha had many ups and downs during her experiment, but the thought of Pulp Factory never left her in any means. In 2012, she presented Pulp Factory into an exhibition having products made with a mixture of odour-free natural glues. In 2014, she showcased these products at the India Design week in Delhi. In 2017, Bharat Chokhani, her cousin joined her as a partner and Pulp Factory was registered.

The operations for Pulp Factory are carried out in Jaipur. The core team consists of just five people. The most important raw material for this is the waste paper (mostly newspaper) pulp which is sourced from the neighbourhood kabadiwalas. Each piece of furniture is up-cycled from at least five to eight kg of waste paper and takes almost 25 days to be ready.

“I think the most interesting aspect of the operations is how the furniture is made. We have ensured that the waste generated during the process is a bare minimum while also ensuring the well-being of the person crafting the furniture,” she says.

The journey towards establishing her own venture was not bed of roses for Spriha. “Working as a woman can be really hard. People don’t take you seriously and one really has to hold their ground to put forth their ideas,” she explains. She also stated that it is very difficult to explain people that the furniture handcrafted from papier-mache actually works. But, with an increase in eco-consciousness and the buzz around it on social media, it’s easier to explain the concept better and spread awareness.

Previous Entrepreneur from Assam sells wheat stubble straws for Rs. 1 each Next Flipkart commits to convert its transport service to electric vehicles by 2030