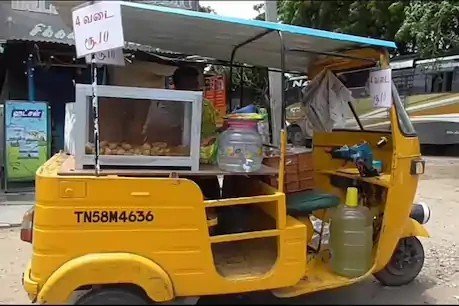 Cumulative praise for Auto-driver who turned his auto into a bakery shop, that lost its livelihood by Corona

Mr. Balakrishnan is an Auto driver from Kochadai area of ​​Madurai. He lives with his wife and two children. He has been driving auto in Kochadai for the last 15 years and has been earning a living from it.

Public transport was banned for more than three months by the Corona General Freeze. Permission was granted by the government to run autos in the 5th phase curfew.

Although autos are allowed to operate, the public is avoiding traveling in autos and rental vehicles for the fear of corona virus. Thus, auto drivers are suffering without proper income.

In this situation Balakrishnan stopped driving and turned the Auto into a Vada shop and sold four vadas for 10 rupees. He also says that he has converted the Auto into a complete bakery and is now earning a good revenue from it.

The people of the area have lauded Balakrishnan for his smart thinking of changing his profession temporarily, even in this critical moment.

Balakrishnan has further stated that even though he had been driving an auto for 15 years, he also had experience in the hotel industry. “Earlier, I started a hotel during the very beginning of the Corona period, but the public is afraid to eat outside. They prefer homemade foods over restaurant ones. Thus, I closed the hotel as well. Now, I earn up to 500 rupees per day from my customized auto come vada shop,” he says.
He has also urged the government to protect the people from the economic crisis caused by the corona virus as soon as possible.