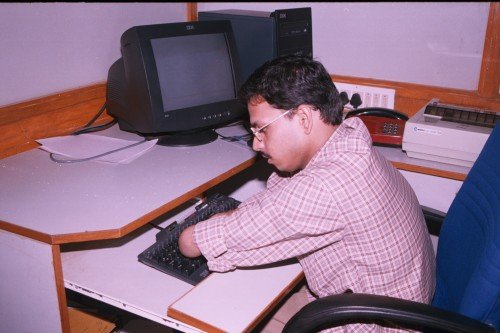 When giving up is never an option- Raja Mahendra Pratap

What would you do if an innocent childhood dare costed you to lose your limbs? How would you perceive life moving forward? How long would it take before you spiral into a soul-consuming depression? Raja Mahendra Pratap of Andhra Pradesh faced this seemingly soul-crushing ordeal and came out stronger than anyone could have expected.

Pratap is a 29-year-old youth who works as a finance and Accounts officer with ONGC, Ahmedabad. He has studied Finance with an MBA and takes home a handsome salary. Everything about his life seems extremely normal until one takes a look at him. An innocent dare gave to him at the age of 5 to hold an Iron rod to an electric wire resulted in an unfortunate accident that claimed his hands and limbs. He remained locked up inside a room for ten years between the age of 6 to 16. His father had almost given up on him after watching his son crawl his way around the house to get his work done.

Pratap, however, was no quitter. He taught himself to read using his sister’s books and passed his higher secondary exams. He, went on to study Finance and MBA from Osmania University. All this while, he also learned to walk using his ankles, got specially designed shoes for himself and even lift things using his mouth and ankle. He can now effectively use the computer with his mouth and ankle

The character trait that stands out in Pratap is the humongous confidence he has in himself and his abilities. Limited as they may be, he has brought himself to a position where he is self-sufficient and is able to perform all his tasks with no assistance.

While searching for a job, most interviewers backed off once they saw his physical limitations. But he kept pushing till the time he bagged a position as an Assitant Manager in a National Housing Bank, Delhi. He currently works as a Finance and Accounts officer with ONGC, Ahmedabad. He received a scholarship from Delhi-based ‘National Center for Promotion of Employment for Disabled People”. He now gives scholarships to disabled students.

Pratap has exuded so much confidence and independence that people started seeing him deeper than his appearance. “Get me any task and I will complete it” has always been his motto. He teaches us that physical limitations mean nothing in the face of strong will and determination.

Previous VIOLENCE AGAINST WOMEN Next Working for a Cause