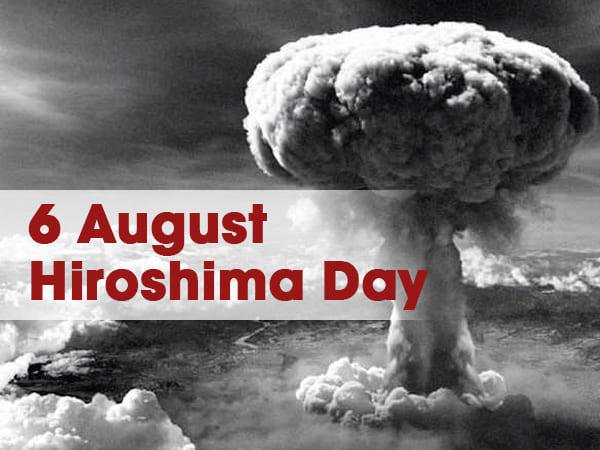 Every year August 6 is observed as Hiroshima Day to raise awareness of the effect of the Hiroshima bomb attack and to spread peace in politics. Hiroshima attack incident took place on August 6, 1945 when the United States deployed a nuclear bomb on the city of Hiroshima in Japan.

In 1945, Hiroshima bomb attack was done with the motive to end the Second World War. Approximately 90,000 to 140,000 people were killed on the spot and about thousands more were hit with generational defects, is affecting the country till now. Later, around 10,000 people died due to the effect of radiation exposure.

The nuclear bomb wiped about 39 percent of the civilians in the city. The United States created two atomic bombs named “The Little Boy” with more than 9000 pounds Uranium-235 was loaded and US B-29 bomber aircraft, the Enola Gay attacked the city of Hiroshima and “The Fat Man” dropped in the city of Nagasaki on August 6 and 9 respectively.

During the Second World War, Japan was against the United States and its allies. As the allies were winning the war, countries like Japan and China were pushed back from various locations. The Japanese soldiers treated the American and the British soldiers cruelly and thus resulted in nuclear attack.

The bomb “The Little Boy” flattened buildings about 2.5 km of radius, thus caused destruction of buildings. As the consequence of the bomb, it led to radiation poisoning what was referred to as “atomic bomb disease”, that has increased the cancer risks, birth defects, gene defects and mental retardation, etc.,

Why Hiroshima and Nagasaki was chosen?

Truman said that bombing a city alone would have enough effect and therefore, Hiroshima and Nagasaki were selected. It was confirmed that these places don’t have cultural significance like Kyoto in Japan, because their purpose is to destroy Japan’s ability to fight wars. Hiroshima was initially a military target with a population of about 3,18,000. It was the seventh largest city in Japan at that time. It is one of the most important military bases in Japan and one of the largest military supply depots and transportation location for troops and supplies.

The atomic bomb is the result of British and American scientific knowledge and it was developed at two factories in the United States. At the same time a scientific laboratory was maintained separately. These were all within the boundaries of the Manhattan Project. It is the code name for the American-led effort to develop a functional atomic weapon.